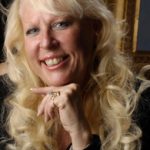 Who is Suzie Seerey-Lester?  Well, besides being married to John Seerey-Lester, one of the world’s top wildlife artists, she has been a painter in her own right for many years.  But there is more to Suzie than her painting.

For some 30 years she was a diver and diving instructor trainer where she brought her skills to important use when she worked for the CIA, teaching CIA agents, Secret Service Agents, FBI and other law enforcement personnel how to dive, as well as other “specialized” skills.   Before turning a professional artist, Suzie worked for several Fortune 500 companies where she excelled in Sales and Marketing.  In her last position in an international corporation she was responsible for more than $2 Million in sales per month.  She eventually turned professional artist, leaving the corporate world behind her, but not forgetting the skills she had acquired along the way.  Even so over the years she has suffered the pitfalls and hard knocks of selling art that all artists go through.  From these experiences, she sharpened her business skills and created these systems to pass on to other artists.  When she is not painting she is in charge of the business end of the Seerey-Lester organization.   Suzie now travels all over the globe to paint, from Alaska to Maine, Africa, Guatemala, England and Spain, with her husband John.

She has won several distinguished awards for her art including: Top 100 in Paint America for two different paintings, Juror’s Award in Paint America for the judges’ favorite painting of the entire show, Judges Award from LSU School of Veterinary Medicine, Artist of the Year from the Ocean Foundation, Top 200 and Top 100 in “Arts for the Parks”, and has shown in Bennington Art Museum, Coos Bay Art Museum, Grants Pass Art Museum, and the prestigious Leigh Yawkey Woodson’s “Birds in Art”. She recently showed with the Audubon Artists at the prestigious Salmagundi Art Club in New York City.  She has sold pieces at Christie’s and Sotheby’s Art Auctions in London, The National Zoo in Washington, D.C., and the Honolulu Zoo. Suzie was honored by the Raymond James Financial Organization in “Women in the Arts” and has her artwork published in “The Best of Oil Painting” book.  Suzie is a member of Society of Animal Artists (SAA), The Wildlife Artists Association (WAA), Oil Painters of America (OPA), American Society of Marine Artists  (ASMA), Artists for Conservation (AFC) and a founding member of Southern Plein Air Artists (SPAA), and the PhArtists.  John and Suzie appeared on the cover of Wildlife Art Magazine for the March 2008 issue, as well as a featured 8 page article on them, and their art.  Suzie was the featured artist for Word Catalyst Magazine in September 2009. Her best selling, award winning book “My Painting is Done, Now What Do I Do?” is now available to rave reviews.

From May until November every year Suzie volunteers for the Mote Marine Loggerhead Research Program on the “turtle patrol” for the loggerhead turtles.  She is licensed by the State of Florida to identify and verify nests, collect data, rescue and release the endangered baby loggerheads and green turtle.  Suzie received the President’s Volunteer Service Award in 2008, in recognition for her valuable service.

In 2000 she married world-renowned wildlife artist, John Seerey-Lester.  They live, work and play in Florida.

Suzie is considered by many to be a real mermaid.