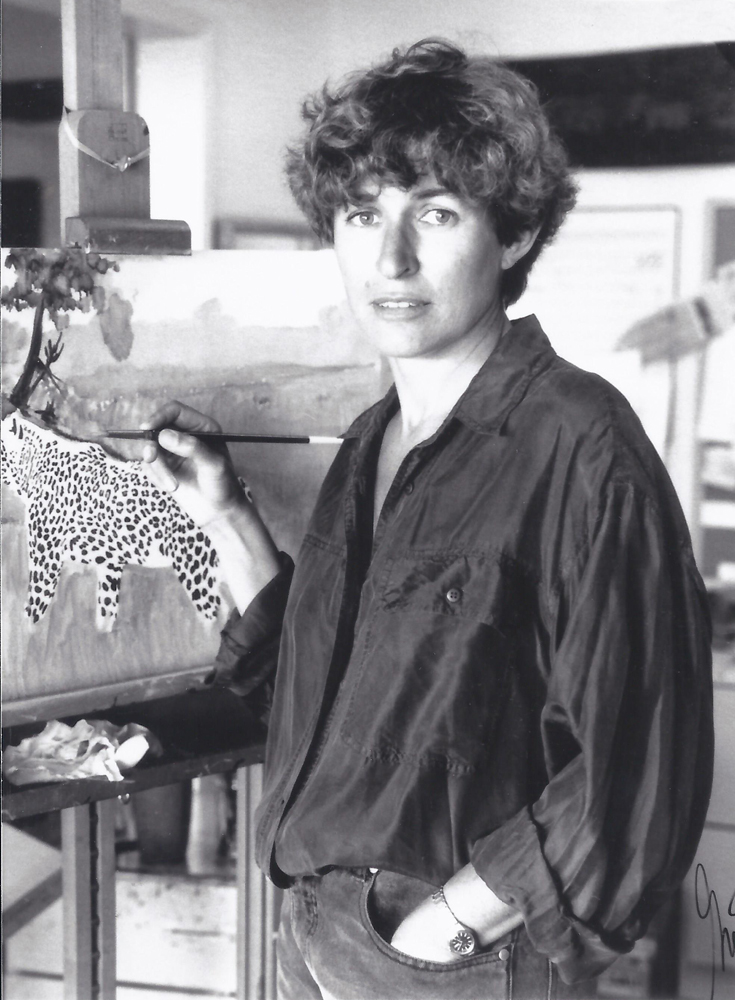 A native of Bulawayo, Zimbabwe (formerly Rhodesia), Lindsay Scott grew up in a tropical setting surrounded by a dazzling parade of colorful birds and exotic wildlife, learning the basics of bush survival. She has the uncanny ability to detect a snake in the tall grass 100 yards away and can recall the occasional leopard strolling down her street. Nature became her passion, and her love for Africa’s wildlife and its landscape became deeply rooted in her subconscious.

Scott always loved to draw. Encouraged by a high school art teacher to continue her artistic studies, she moved to Cape Town to attend the Michealis School of Fine Art in South Africa. But there, representational art was frowned upon, and ironically, African wildlife art was considered irrelevant compared to abstract art. Scott bolstered her studies with courses in botany, biology and zoology and continued doing field sketches of the plants and wildlife she loved. She transferred and earned her degree in fine art with a minor in biology from the University of Minnesota.

Scott has worked as a botanical researcher at the University of Cape Town and as a curator of paleobotany and ornithology at the South African Museum. She also conducted natural history field trips throughout Africa and Antarctica. She spent 14 months in Australia researching bird behavior for The National Geographic Society. Her first-hand knowledge of animal behavior expanded as she filled countless sketch pads with her observations.

As adept with a pencil as she is with a brush, Scott’s drawings are exquisitely detailed. In 1984, her black and white drawing of two mourning doves was accepted for the prestigious “Birds in Art” Exhibition at the Leigh Yawkey Woodson Art Museum; an honor that she has enjoyed 11 times. One of her pencil drawings is part of the Museum’s permanent collection. She received the Award of Excellence from the Society of Animal Artists, as well as Best of Show and First Place at the Pacific Rim Wildlife Art Show.

Seeing detail with the eye of a naturalist, she has a zoologist’s knowledge of animal behavior and an uncanny ability to convey the body language and facial expressions of the animals. A devoted conservationist, Scott sees her role as a wildlife artist as a way to educate and raise the consciousness of others: “I hope that what I do encourages people’s desire to learn more and preserve what precious little resources are left…Nature is the most healing thing on this planet. I try to bring a little bit of that indoors.”