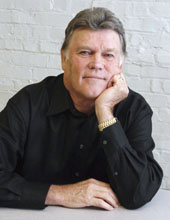 Dave Barnhouse has never forgotten the values learned in his youth. He is a self-described ‘country-boy’ who grew up in small-town Richmond, Ohio, and Dave has no intention of leaving that environment either physically or emotionally. “I want my art to make people feel as though they were back home on a Friday evening experiencing the warmth of a cozy fire and smelling the homemade bread and cookies coming from the oven”. Dave’s paintings are snapshots of life the way he remembers it from the 1950’ and 60’s.

Today, Dave works mostly in oil paints, but as soon as he could hold a pencil, this artist started expressing his artistic talents. One of his first drawings was a threshing machine on his grandfather’s farm in Richmond. “He drew all the little details,” remembers his mother, who encouraged her son to pursue his art. The subject matters that interest him range from Western images and Native-American scenes from the East and West, as well as his more recognized works featuring farmsteads, tractors, old classic cars, trains and motorcycles in nostalgic scenes of small town America.

Barnhouse’s works have earned many awards and honors. He was voted ‘America’s third most popular print artist’ in 1995 and 1996 . He was included in InformArt’s “Top 10 Hottest New Artists” in 1995 and moved into the number three position in 1996. Dave’s art has moved into the international market as well, in print form, puzzles and other various merchandise.

Dave became a full-time artist after a long career as an electrician in the Weirton-Steel, steel mill in West Virginia. Today he paints full-time in his studio, which is part of the Ohio home he shares with his wife, Marie.