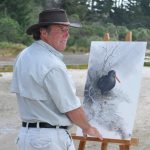 Christopher B. Walden, originally from Auckland New Zealand, came to the States in 1979 for what was supposed to be a 30 day tour. Thirty-six years later he is still here and in the meantime has become a nationally known wildlife artist. Chris’ passion for the outdoors began at a very early age. Growing up in New Zealand, Chris was able to experience everything outdoors from working on a sheep farm to sailing the South Pacific. From these experiences Chris was able to gain knowledge of nature and the life that inhabits the “bush” and the water. He is an avid outdoorsman who likes to go fishing, be it in lakes and streams for trout or on a yacht trying to catch marlin and “kingies”. He brought his passion of the outdoors to the States. His thirst for knowledge about these new environments and inhabitants inspired him to capture them in his paintings.

Chris’ very realistic style and his ability to capture life in the animal kingdom have endeared him to many collectors around the world. Chris prefers to show the viewer a story of how life is in the wild. His conflict pieces are sometimes very subtle as in “Sittin’ Ducks” and others as in your face as “Conflict of Interest”.

If you were to ask Chris to describe himself he would tell you that he is first a father, secondly a lover of the outdoors and thirdly he is just a “Kiwi” from NZ who likes to paint what he knows and has been lucky enough to make a living from it.

Chris feels the need to give back to the lands and animals he paints by making sure that they are still around for many generations to come to enjoy. To accomplish this mission Chris has teamed up with several conservation groups in the US to lend his talents to help raise money and awareness to preserve the habitats that are in danger. Chris’ involvement with groups such as Ducks Unlimited, National Wild Turkey Federation, Quail Unlimited, Ruffed Grouse Society, Pheasants Forever, The Rocky Mountain Elk Foundation, and the Three Valley Trust Organization has given him the opportunity to share his artwork and his views on preservation with a wide group of people across the Country. Through donations of artwork in the past 30 years Chris has helped raise over 28 million dollars for conservation.

Raising funds and awareness for conservation does not stop at the border. Chris has taken his mission back home to New Zealand where one-third of our world’s most endangered birds reside. Chris has formed a non-profit tour group called SPACE (South Pacific Artist Conservation Effort). Chris hosts a group of 6-10 outdoorsmen for a 13 day tour of the land he grew up in. The money raised from these trips is put back into the conservation effort going on in New Zealand by NZ Ducks Unlimited and the NZ fish and Game Board.

Combining his passion for creating art and protecting wildlife, Chris and his work reach a singular place. The artwork of Chris Walden vibrantly portrays the passion and beauty of the natural world. The untamed wildlife featured in his work evokes the mystery and turbulence of creation. Viewers are challenged to experience the essence of the natural world in it most raw form.