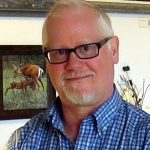 (1958-2019) Internationally acclaimed wildlife artist, Terry Isaac, grew up in the Willamette Valley of Oregon, and it is there that he began his love affair with wildlife. Drawing inspiration from his own backyard and from the captivating vistas of the Northwest, he began to create dramatic wildlife art. He then called Penticton, British Columbia, Canada “home” and, continued to create paintings capturing unique characteristics of wildlife and their habitat. Terry traveled around the world to capture exciting images, but his main painting focus continued to be on North American birds and mammals.

Terry’s formal art began with an interest in animation and drawing cartoons. After art college, he was interested in children’s book illustration but soon re-discovered his childhood passion for wildlife. Since the mid 1980’s, he has created realistic wildlife art with a focus on particularity and dramatic light. He was inspired by large panoramas as well as close-up views, and by subjects ranging from whales to hummingbirds.

During his successful professional career Terry has been the featured “Artist of the Year” at a number of prestigious art shows/expos, placed in 12 stamp and print competitions, been commissioned to create for the Audubon Society handbooks and hired to develop the main character in a Walt Disney production. His works are housed in prominent permanent collections such as Leigh Yawkey Woodson Art Museum, Bennington Center For The Arts, American Airlines, First National Bank of South Africa and in many private and corporate collections around the world. His paintings have appeared for sale and re-sale at Christies Auction House, London, England.

Isaac participated in several important art competitions, including Leigh Yawkey Woodson Art Museum’s prestigious “Birds in Art” exhibition, in which his art has been featured 14 times and the Society of Animal Artists annual exhibition. He was invited to participate in a number of prominent gallery art shows on an annual basis.

Terry was an accomplished teacher, and his approach to painting is outlined in his own book “Painting the Drama of Wildlife, Step by Step” now in its second edition (North Light Books, 1998). The book’s success led to the creation of a DVD, “Painting Wildlife in Acrylic” (Creative Catalyst, 2005). Terry’s art has also been featured in several other books, “Painting Birds Step by Step” (cover/North Light Books, 1996), “The Best of Wildlife Art” (cover/North Light Books, 1997), and “More Wildlife Painting Techniques of Modern Masters” (Watson-Guptill Publications, 1996). Terry taught annual workshops, with students attending from all over the world.

Demand for Terry’s originals remained high, partly due to the fact that his technique of painting and the detail he captured means that he painted relatively few paintings per year. Terry’s work was published by Mill Pond Press for almost 20 years, and many of his limited edition prints are sold out. Terry then became a self-published artist, who strived to create works of art for the discerning collector and only printed a select number of his paintings with very small edition sizes.  How work continues to be available through licensing partnerships with Ansada and his gallery.  For more information on originals and limited edition prints, please go to www.terryisaacsart.com.  For more information on licensing, please contact us here.