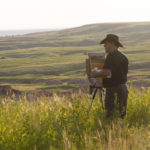 The soul of Jason Tako’s artwork has its origins in the wetlands and prairie areas of rural Minnesota. He spent the summers of his youth fishing at the family cabin and winters wandering through the nearby wooded areas and playing on frozen lakes. Noticing he had a raw talent for drawing, several elementary school teachers encouraged him to pursue and refine his artistic talent. Jason took this encouragement into his surroundings, and inspired by the writings of Claire Walker Leslie, he determined to sketch from life as much as possible.  During his senior year in high school, Jason put aside his sketchbooks and delved into music. Attending what later became McNally Smith College of Music, he studied bass guitar and jazz music theory and graduated top of his class
with honors. He spent the next ten years playing in numerous rock, jazz, and country bands and recorded several albums.  Realizing how much he missed the serenity of nature, Jason picked up his sketchbooks again and headed back out into the wetlands of southern Minnesota. While studying the writings of Kimon Nicolaides, Jason honed his drawing  and observation skills by sketching directly from nature. Afer spending several years in solitude sketching from life, Jason plunged himself into studio oil painting all while keeping up his discipline of plein air painting. “I was plein air painting before I ever heard the term or knew of the movement. I only understood that drawing and painting from life was the best way to learn. Heading outdoors long before sunrise, I would spend hours in a duck blind just watching and listening. Tose moments are with me to this day,” Jason says. Tat time of quiet observation in the feld paid oﬀ. Several years later, Jason began exhibiting in national art events. His resume includes exhibitions and awards at Plein Air Easton, History Meets the Arts, Te Southeastern Wildlife Expo, Te Waterfowl Festival, Door County Plein Air, NatureWorks, Te Society of Animal Artists, Oil Painters of America, and Te Mountain Oyster Club Art Show. He has been featured in editorials in Western Art Collector Magazine and Plein Air Magazine. Jason has recently been called “One of the foremost western, wildlife, and historical Native American painters” by the Southeastern Wildlife Expo, and was selected to be their 2020 Featured Artist.  Jason is in the unique category of being one of the few plein air artists who paints animals from life, and one of the few wildlife artists who paints en plein air. Jason believes that the years of plein air painting gives him an advantage over using solely a camera for gathering reference. Over the last several years Jason has expanded his focus to painting historical Native American subjects. “I have always had an interest in history, and during my years of wandering through rural Minnesota, I frequently thought about the American Indians and how close they were with nature and the unique privilege they had to live in an unspoiled land. I love being able to combine my love for landscape painting, nature, the human fgure, and American history all into one painting.”