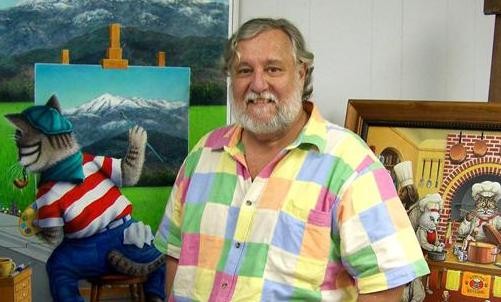 Southern California artist Don Roth comes to the craft of painting with a vast range of abilities and experience. He incorporates the technical skills of a making his creations a wonder to behold.  Don’s extraordinary talent blossomed while obtaining his Commercial Art degree in college, and continued to develop in the US Navy, where the artist served four years as an Illustrator Draftsman.  The following eight years were spent as a one-man-art-department for a large city in Orange County. Ultimately, Don found a home for nearly twenty years as a Senior Industrial Designer in the commercial aircraft industry.  It was there that the artist developed his skill creating precise airbrushed renderings, techniques that would distinguish his paintings from the competition in his ultimate career as a fine artist.

Currently, Don Roth has gained world-wide exposure with his whimsical and highly detailed series of “cool” cat paintings.  This on-going series of colorful and collectable images is titled “The Kool-Kat Kollection”, and has earned the artist the un-official title of “The Norman Rockwell of Cats”.  Don’s creations can now be seen locally in art galleries, pet gift shops, in the homes and offices of private collectors, on the lobby walls of a large hotel resort in Florida and in a soon-to be published children’s book.  Several of the images from the series can also be seen on greeting cards, t-shirts, beach towels, and jigsaw puzzles.

“The world is a serious and often stressful place to live.  If I can bring a chuckle or a smile to the face of my viewers with my paintings, then we are all the better for it.”